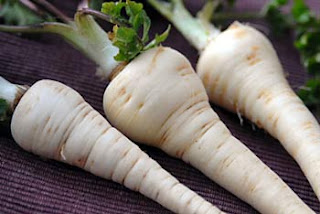 I made this some years back during the winter, thinking along the lines of something to complement parsnips and the mid range in flavour tones they have, which is not to dissimilar from vanilla. I had thought along the lines of honey or similar, but then it hit me - a can of chestnut puree eyed me suspiciously from the shelf and thus this hearty winter warmer was born.

It is a very filling, sweet and comforting soup. If you are a fan of parsnips and generally sweet vegetables this will be right up your alley. Posted at the request of Jaffacake - this recipe hits all the buttons for the budding soupmaker. It works on a number of levels and can be applicable to alot of vegetables such as carrot, sweet potato, butternut squash and even turnip or mooli radish.

Feel free to play around with the recipe a little - use of mellow spices such as turmeric and cumin can make this dish even more pleasurable.

3 or 4 parsnips, cleaned and peeled into ribbons. Chopping them up works but will take alot longer.
Can of chestnut puree
500ml milk
250ml vegetable or chicken stock.
1 large onion diced finely.
Teaspoon of butter or margarine

Heat up a large pan, add the finely diced onion and the butter. Cover the pan and allow the onions to sweat and soften, then add the parsnips. Allow the parsnips to colour slightly then turn the heat down to low and cover the pan until the parsnips begin to break up. Add the milk and allow to come up to temperature, but not boil, When the parsnips have turned to a mash texture, add the chestnut puree then blend to a uniform texture.

Add the stock, bring to the boil then simmer for approx 20 minutes. Taste and season appropriately

Serve while piping hot, and add a spoonful of honey if feeling adventurous.
Posted by Unknown at 13:46