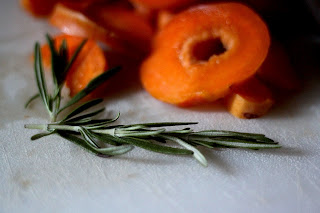 I'm a bit of a traditionalist when it comes to stuffing, in that if its not inside meat or fish or vegetables then its not really a stuffing. For me its meant to be inside whatever its stuffing so that it can add to and absorb the flavours of the carrier. That said I am amenable enough to appreciate that people serve it on the side as less of a fuss and bother in preparation. I suppose ultimately its all down to preference.

Composed at the request of "jaffacake" this rosemary and apricot stuffing recipe works well for pork and lamb alike, with all sections of the pig / lamb applicable such as leg, shoulder, loin or fillet.

It can also serve as a good filling / padding for meatloaf if you come across some cheap lamb or pork mince, which is good especially during the winter months as its hearty, filling and full of flavour and uses robust winter herbs.

Saute bacon,onions, garlic and celery in a pan until soft and a little colour added

Combine all ingredients with breadcrumbs in a bowl, melt the butter and add until unifom mixture is reached.

Wrap mixture tightly in clingfilm into a sausage shape, tying both ends then steam for about an hour until fully cooked (firm to the touch).

slice into pieces and reheat as neccessary. Devour.