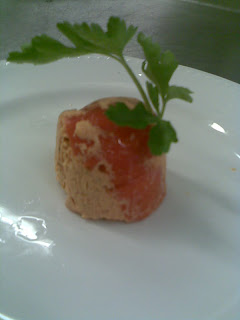 This recipe comprises all the things i love about peppers, their sweetness their texture and their wondrous flavours that complement such a wide spectrum of accompanying ingredients. When experimenting with this recipe and mousses in general i was trying to move away from the standard "salmon" and similar mousses that everyone uses for starter and side dishes. Instead the use of a red pepper gave opportunity to the vegetarian frontier - which are often as an audience can be found to be neglected or offered "token" gestures.


This recipe makes a large batch (about 14 portions so feel free to divide by two or three for a more family size.

*** (Makes about 14 timbales)
Ingredients.
5 Red bell peppers
4 egg whites
300g cream cheese
1 Tbsp honey
1 Tbsp chopped parsley
1 Tsp paprika
1 clove peeled garlic
Pinch Salt
Pinch Pepper
Preparation:
Grease and line with cling film about 8 timbale moulds (metal!).
Cut cheeks from peppers and place in small roasting tin. Add water to tray (just enough to cover the peppers half way up) and cover tray with tinfoil. Cook peppers in oven until the flesh begins to soften. Allow peppers to cool then peel cut away the flesh from the skin. We are going to use the skin for a decoration so do not discard. Instead, put the skin (shiny side down) into the bottom of each mould. Any skin left over add to the food processor.
Whip up egg whites until foamy.
Combine in food processor pepper flesh, and all other ingredients. Add the egg whites last.
Pour mixture into moulds, leaving about ½ centimetre from the top
.
Cover moulds with foil tightly. Poach timbales in bain marie until mixture is firm to touch. Allow to cool and refrigerate.
Posted by Unknown at 01:37